In November, we’ve been to PyCon CZ 2015. And when I say we I mean Fedora Python maint and friends team: Matěj Stuchlík, Robert Kuska, Slávek Kabrda, Michal Cyprian, Michal Srb and me.

PyCon CZ 2015 was the first PyCon in the Czech Republic. With Fedora being very Python friendly and with our “Python 3 as Default” feature, we thought we had to be there to represent Fedora. We actually did that in 2 ways:

We had a standard blue Fedora booth with stickers, DVDs, 3D printer and (which was a bit of an experiment) blue soft drinks.

The blue drinks were quite an attraction, but we had a lot of them and we were unsure whether people would drink them all, so we stepped up and started delivering the drinks to presentation rooms. We were distributing them during breaks and we were telling people that they’re a gift from Fedora community - the responses were great and it attracted even more people to our booth. We almost run out of the drinks on Saturday and only a few bottles remained for Sunday workshop sessions. See the cases behind Slávek, our “Python 3 terrorist”, as some call him: 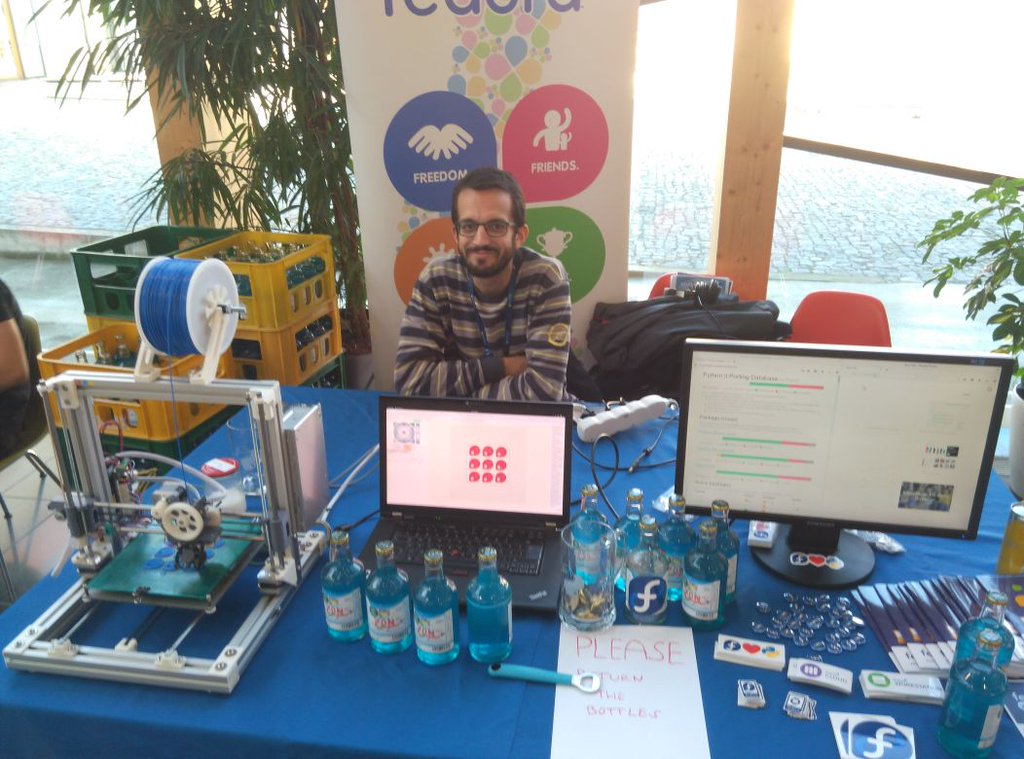 If you observe the photo carefully, you might find some new Fedora Loves Python stickers we’ve designed for this event (we still have plenty more for upcoming events).

On Sunday, the sprints took place at a different venue and there was no room for booth, so we changed our tactics and organized a sprint instead. Python 3 Porting FAD was an international Fedora Activity Day focused on porting stuff to Python 3; on PyCon we were there to do our part and to help others join Python 3 porting - either upstream or downstream in Fedora. While the FAD itself was a huge success, we must admit that we expected more PyCon attendants to be interested in our sprint. Lots of poeple visited workshops happening in the same time slot or just chatted with each other (drinking the rest of blue soft drinks). Still, we had a nice chat with several developers interested in Python 3 porting and we managed to get our “Python 3 is the Python” message across to quite a few people. Reactions to that were pretty great, the Python community really does appreciate where Fedora is moving.